How Long Does It Take to Hike Angels Landing?

If you’ve had the pleasure of seeing photos taken from the summit of Angels Landing hiking trail in Zion National Park, then you understand why it is the favorite of so many hikers. The panoramic views from the top of the trail are awe-inspiring, and a photograph cannot do them justice. Before you make your way to Utah and to Zion National Park, you might wonder, how long does it take to hike Angels Landing. To answer that question, and any others you might have about this beautiful place, read on. 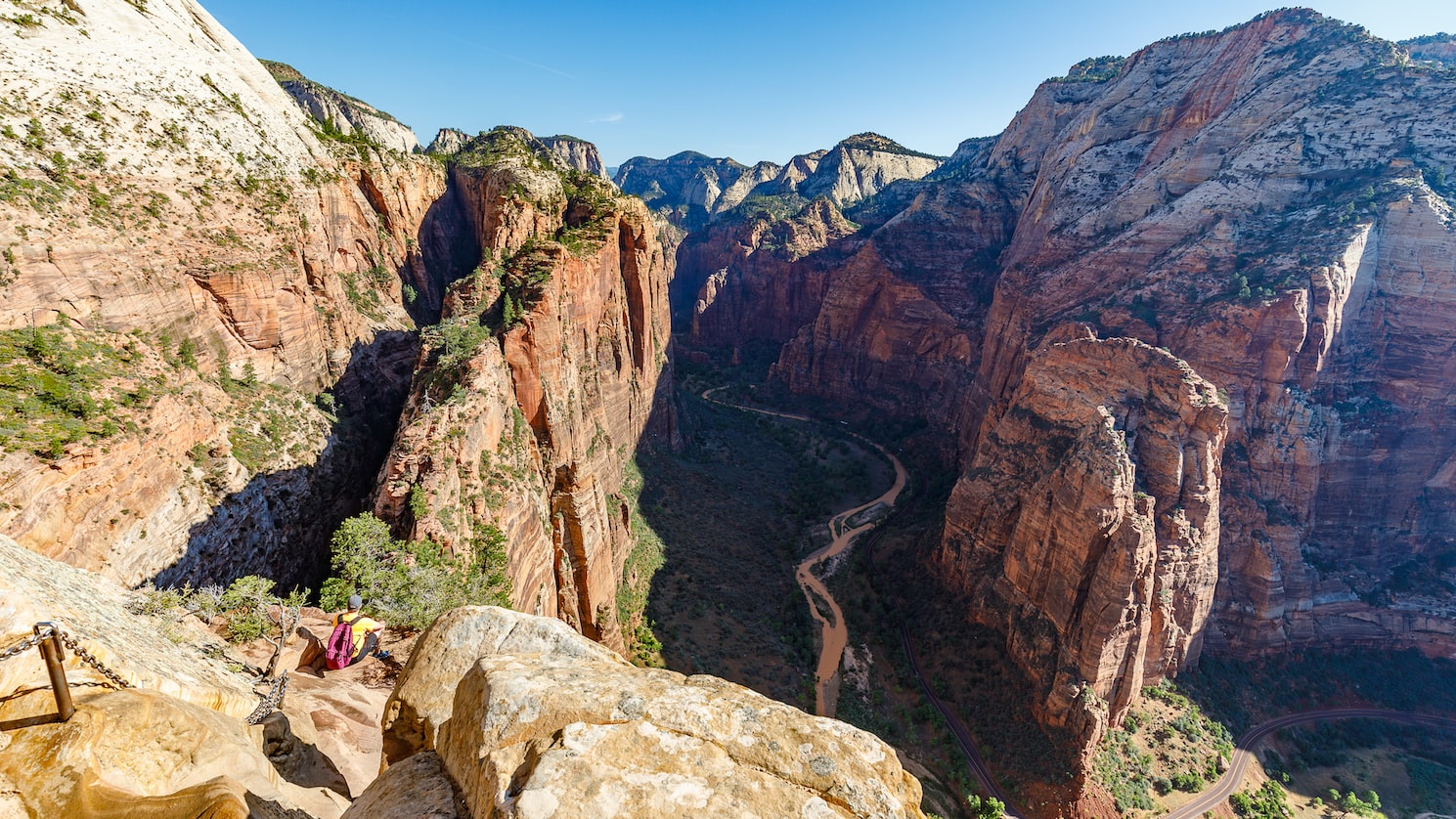 The Zion National Park area was first explored by John Wesley Powell in 1872, and after observing the majestic rusty orange cliffs and the straightness of the Virgin River that runs through it, he named the area we now know as Zion National Park, Mukuntuweap National Monument. This name means straight canyon and straight river.

While Powell might have been the first to name the towering cliffs, he wasn’t the first to explore them. Early humans inhabited the Zion National Park area during the Archaic Age (between 6,000 BC to 500 AD). Small groups of Nomadic people hunted the area within the modern day park. During the Formative Period (500 AD to 1,300 AD), the Virgin Amasazi and the Porawan Freemont people called these towering cliffs home and migrated along the Virgin River looking for food. Though some groups were nomadic, others established pueblos, or little towns, along the banks of the river.

Both the Virgin Amasazi and the Porawan Freemont peoples disappeared mysteriously from the area during the 1300s. Some speculate this was because of catastrophic flooding typical of this area. Some time during the 1300s, the Neo-Archaic people came into the area and lived there until well into the 1700s. They lived off of the wildlife in the area but also cultivated farms of corn, squash, and sunflowers.

In 1847 Latter-Day Saints Church Leader, Brigham Young brought a group of church members to the site, and from here Mormon pioneers settled the area and started growing cotton. President Woodrow Wilson was the first to declare its name to be Zion National Monument, and it wasn’t until 1919 that Congress declared the area a national park and its name became Zion National Park.

TO KNOW ABOUT ZION NATIONAL PARK Before answering the question, how long does it take to hike Angels Landing, we should learn about where it’s located. Zion National Park is in southwestern Utah, and it sits within the Slot Canyon Territory. While it’s one of the smallest of the national parks, it is the third most popular, with annual visits just under those of The Smokey Mountain National Forest and Yellowstone National National parks. With its massive rustic orange canyons above and the Virgin River flowing below, the park offers an array of wildlife and scenery that will peak any hiker’s interests.

Zion National Park is easy to get to. It’s just three hours outside of Las Vegas and close to the Nevada and Arizona borders. Since it is a national park there are fees for entering, but these are reasonable at just $35 per non-commercial car load. People entering by foot or on a bicycle only pay $20 per person. To purchase an annual pass would only cost you $50 per person.

THE SEASONS OF ZION NATIONAL PARK 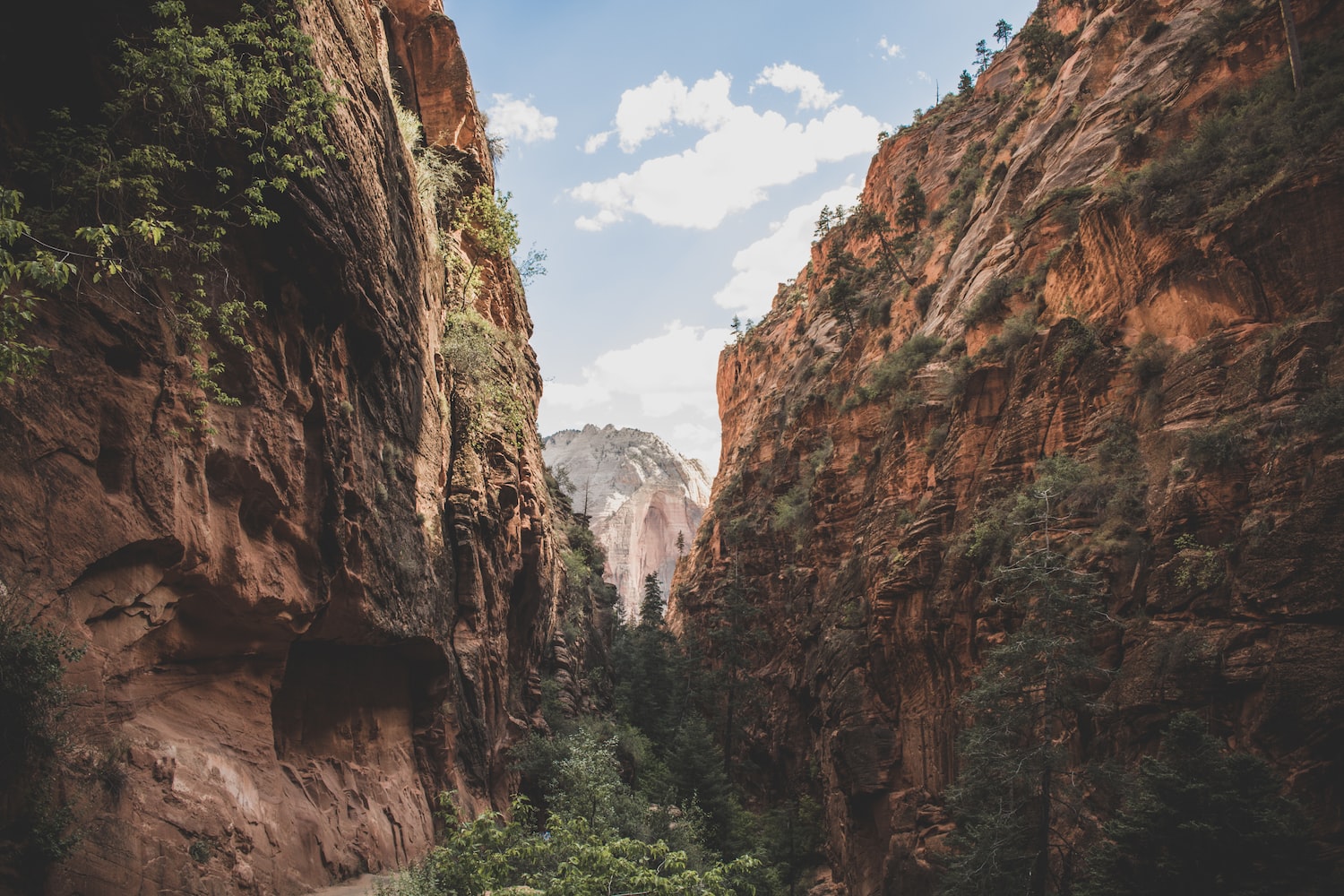 While the park itself is open year round, there are optimal times to plan a visit. The temperatures and weather within the park can be temperamental, especially during the winter and spring months. Temperatures range everywhere from 30 degrees to 100 degrees throughout the seasons.

Spring is a beautiful time with mild temperatures; however, from March to mid-May there will still be water run-off of melting snow from the previous winter. Usually during the spring, the main canyon and the upper canyons can be accessed, but some lower lying trails might be flooded. If you travel to Zion National Park during the spring, especially early spring, you might witness traces of snow still on the ground.

While summer means that most trails should be open to the public, it is also the busiest time for the park, and the hottest. Temperatures during the summer range from an average of 97 to 66 degrees Fahrenheit. When that afternoon sun hits you, it might feel you are in an oven; especially with the backdrop of the deep red sandstones.

The fall in Zion National Park is probably the nicest time to visit. During this time you have the color changes of the foliage coupled with the multi-colored rock formations, and together they make a beautiful landscape. Typically trails will start closing once the first snow of the season hits in November. The temperatures during the fall range from a high of 80 degrees to a low in the 50s.

While you can still take a trip into Zion National Park during the winter months, don’t count on a lot of company. The snow will close most trails, leaving only the main canyon open. Most of the quaint businesses in the nearby town of Springdale will be shut down for the winter, and the shuttle system won’t run. If you drive through the area on your own, take precaution as the snow can make doing so treacherous.

IT TAKE TO HIKE ANGELS LANDING? 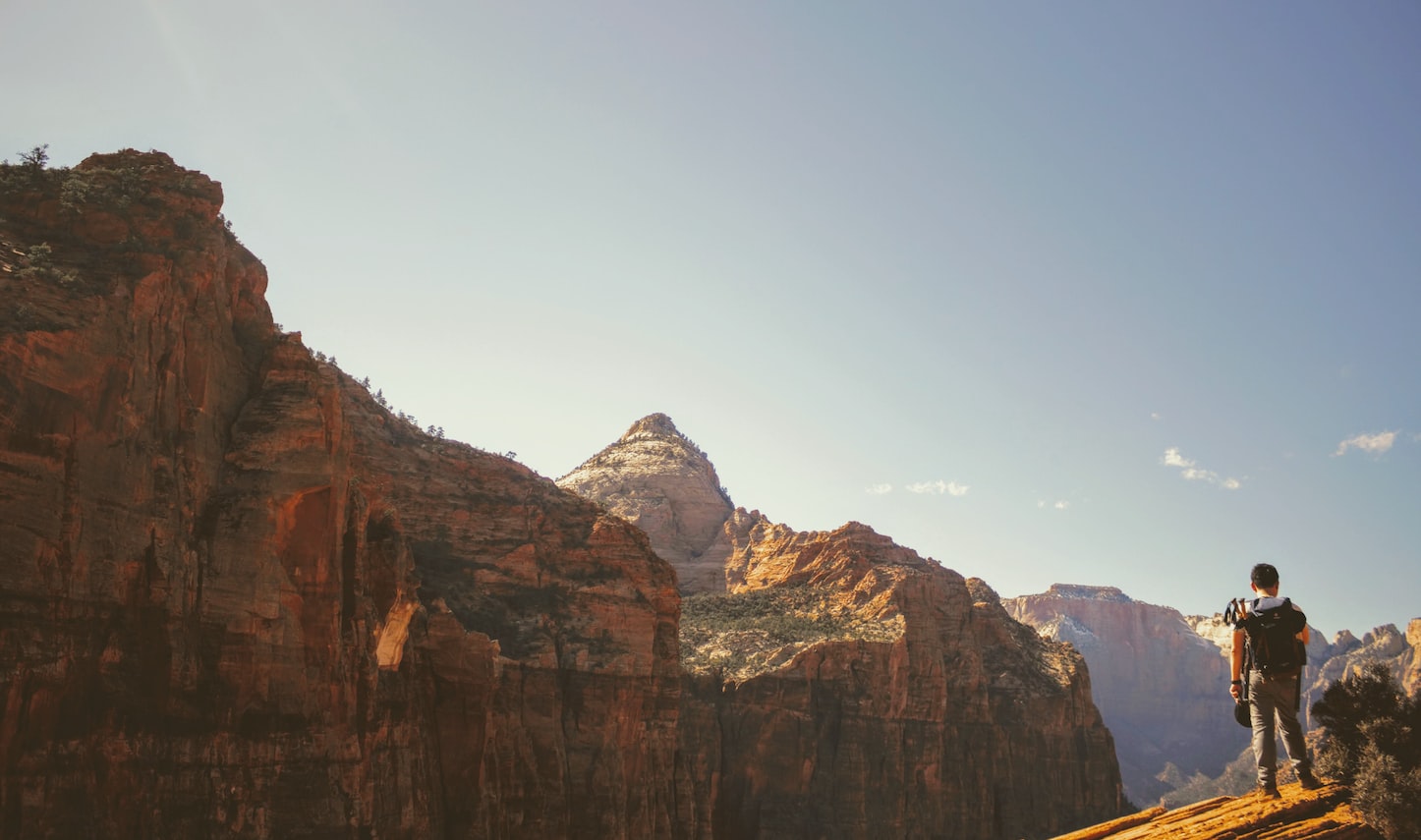 Angels Landing is a somewhat rigorous trail spanning 5.4 miles (8.7 kilometers) that runs along the west side of the main canyon. With a maximum elevation of 1,488 feet (453 meters), the trail traverses the unique fish-fin mountain formation, and at the end you will follow along a narrow path with steep drops on both sides. The path can be rough, but the view from the top is breathtaking.

For most experienced hikers, the round-trip trail takes about four hours but could range anywhere from three to six hours to complete. Below is a detailed description of the trail, turn by turn, and some landmarks to look for along the way. While Angels Landing isn’t the easiest hike within Zion National Park, it is one of the most popular because of the eye-popping 360-degree views. Even more important than knowing how to answer the question “how long does it take to hike Angels Landing” is knowing what to look for along the way.

If you are taking the Zion Canyon shuttle, you can reach Angels Landing from the 6th stop on its route. This will take you to The Grotto, which is a nice picnic area if you are interested in stopping and fueling up before the hike. For the first part of the hike you will follow the West Rim Trail as it crosses over the Hiker’s Bridge (over the Virgin River). This trail continues along a paved but steep path. It leads you to Refrigerator Canyon, which is always cooler no matter the temperatures outside. This is a massive canyon, and you will look around in awe at the cliff walls surrounding you.

Hopefully, you stopped and enjoyed some rest at Refrigerator Canyon because as you head closer to Angels Landing you will have to trek through Walter’s Wiggles. This is a switchback trail that was constructed as part of the CCC projects during the Great Depression. The mason work has the feel of old ruins, and the switchbacks are tight and steep. Take your time and be courteous to other hikers. At the top of Walter’s Wiggles you will find Scout’s Lookout. Stop and enjoy the view, and water and a snack.

At this point you will leave the West Rim Trail and begin your trek up Angels Landing. This is where the real fun begins, as you are now hiking up a narrow spine-like ridge for a climb of 500 feet. Take slow and steady steps from this point forward, as you can see steep drops on both sides. While there are chains and guardrails, this can be a very intimidating hike, especially for beginners.

There are rest spots along the way, and we highly recommend you take advantage of those. If you feel the least bit frightened by the first set of chain handrails, do not continue. The hike does not get any better from that point; actually it gets even tougher. Once you reach the pinnacle, take a breath and look around. While this isn’t the highest point in the park, it offers a beautiful view worth every step. 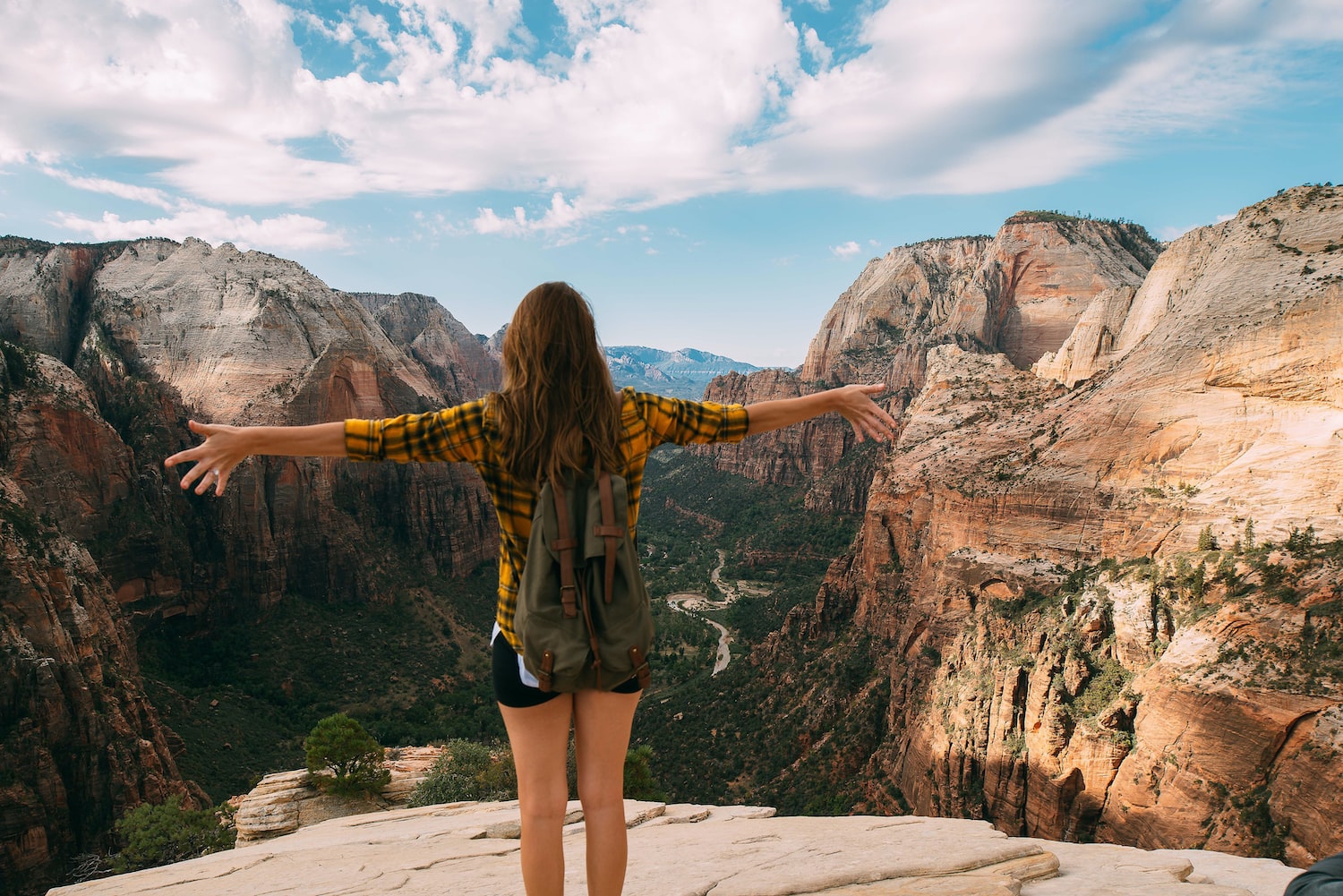 This is a moderate to advanced hike and is not recommended for small children or anyone afraid of heights. Realistically, it should only be attempted by healthy adults and children who are able to stay close to you and follow rules. There are absolutely no pets or bikes allowed on Angels Landing.

During the peak seasons of late summer and early fall, the crowds can come to a gridlock on the trail, making it more dangerous. We recommend you start your hike early. By midafternoon you won’t be able to enjoy it as much, and it will take a lot longer. Come prepared with quality walking/hiking shoes, plenty of water and snacks, and sunscreen. Take a camel pack that will allow you to drink hands free.

When you ask how long does it take to hike Angels Landing, the answer is it will take right around three to six hours; but always hike it safely. Over the past few decades a few hikers have fallen to their deaths, so it’s important to respect the magnificence of the canyons while enjoying the beauty of the site.